Skateboarding is one of the most adventurous sports available in the current generation. Well, if you are also fond of skateboarding and want to enjoy your ride on the go.

In that case, there are a couple of Skateboarding Games that you must consider. These games offer you an unmatchable skateboarding experience right on your console. In the virtual gaming world, you can practice and master the peculiar move that you have been grinding on for long. 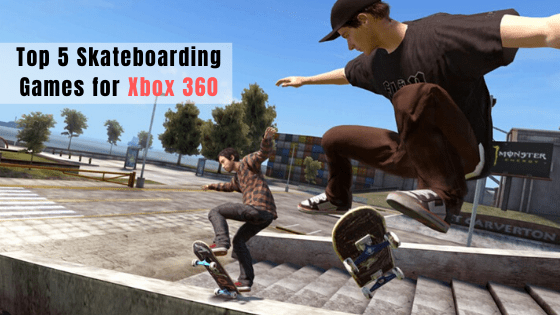 All of these games offer the best realistic environment and physics that let you enjoy the skateboarding as you ride in the real world. So, let’s dig in to help you choose the best skateboarding games Xbox 360.

Skate was one of the toughest contenders of Tony Hawk, which was the best skateboarding games of that time. This game offers an organic control system that allows players to perform different tricks just by moving the left and the right sticks in specific patterns.

However, this control system of the game is challenging for beginners, but not an impossible task to learn.

Skate offers an excellent and authentic skateboarding experience on consoles instead of the arcade feel of Tony Hawk Pro Skaters. This game features an authentic environment that the players need to make his rider in the perfect position for the landing instead of by pressing simple buttons.

If you have been playing the THPS for long, it might be challenging to control the rider at the initial stages.

Apart from the control, Skate offers a story-driven action. You need to travel around the city, completing challenges, and garnering recognition. Additionally, there is also an open-world scenario where you can do practices and perform different types of tricks and techniques. You are free to do whatever you want, making it the best place for learning.

Underground lets you make your character instead of Pro Skater. You can train yourself in different tricks and styles and perform them in the arena.

Besides, the environment of the game is entirely different from its previous version. You can ride on your skateboard on the streets instead of parks and some insane location like Area 51. The story of this game is very entertaining that lets you stick to the game for long. It comes with different challenging missions that you need to complete to earn fame. You can also customize your character in the way you like it to be.

The graphics of this game are somewhat better than the Tony Hawk’s Pro Skater, but still, it lags behind the Skate in terms of graphics. Just like its predecessor, you are also allowed to explore a variety of cities that gives you a couple of adventurous skateboarding options.

So overall, if you are looking for the best story-based skateboarding game, especially from the Tony Hawk series, this is the best choice for you.

Another high-performance best Xbox 360 skate game from Skate series. As its name suggests, this is the successor of the Skate that comes with some significant improvements.

However, the game still sticks to its old formula as the first game but comes with completely re-defined levels and gameplay.

Furthermore, Skate 2 continues to be challenging and rewarding as its predecessor with the same signature flick-it control system. Apart from this, Skate 2 comes with an entirely new set of tricks and styles. So, even though if you have played the Skate, playing this game will offer you a completely new experience. Also, Skate 2 will keep you practicing and discovering for hours.

The thing that makes the Skate 2 different from other skateboarding games is its some fiction-based storyline that lets you enjoy the skateboarding beyond the imagination. You are given an entirely new set of new tricks, fresh challenges, and all-new contests. It revolutionalized the world of skateboarding video games.

So, if you love facing different challenges while skateboarding, this is the perfect game for you to try. So, download this game today on your Xbox 360 and master every challenge, prove your skateboarding skills, and become the professional skateboarder.

The fifth edition of Tony Hawk‘s Pro Skater is one of the most popular and successful skateboarding games in the series.

So, what makes it different from other Skateboarding games? It is still based on the classic formula that was set by the Pro Skater and Pro Skater 2 but offered a bag of new features.

In addition to these features, Pro Skater 5 offers a bunch of new levels like the Foundry, Skater Island, and the Cruise Ship. Also, there are some new secret characters added in the game, including Darth Maul, Doom Guy, and the Demoness. Apart from this, the game still offers its signature arcade-like feeling.

So, if you are looking for an authentic but modern skateboarding experience on your Xbox 360 console, you must try Pro Skater 5 once. In case, if you don’t have an Xbox 360, you can also enjoy this game on PS2 or PS3.

At last, the most advanced and successful version from the Skate series. Similar to its previous version, Skate 3 still features its retro challenging control settings that offer an immersive skateboarding experience on a console.

It comes after a long time after the release of its previous version – Skate 2. However, it comes with considerable modifications in terms of 3D graphics, gameplay, storyline, and new tricks and moves.

The graphics of this game has been modernized and offers a seamless and immersive gaming experience. As mentioned above, there are a couple of new tricks and moves added in the game that is quite challenging to perform. Also, there a couple of new locations added in the game to explore. Just like its previous games, it offers an entirely new skateboarding experience.

Although Skate 3 is a recently launched game from the Skate series, this game is compatible with most of the older consoles. So, how older console you are having, you can still enjoy Skate 3 at its best. So, if you are looking for a Skateboarding game that offers an immersive 3D skateboarding experience on Xbox 360, this is the right choice for you.

So, these are a couple of best skateboarding games for Xbox 360 currently available. These games have been there for a long time, offering an excellent and immersive skateboarding gaming experience on consoles.

18 Different Types of Longboards: Everything You Need to Know

How to Change Skateboard or Longboard Wheels: A Brief Guide

How Much Does a Skateboard Weigh: A Quick Look at the Numbers

How to Get Better at Skateboarding: 10 Tips from Expert

How Long Does a Hoverboard Battery Last: Everything You Need to Know

Delongboard is your one-stop place for all the comprehensive guides that offer to learn longboarding and helps in buying right longboard and other tools like bearings, trucks, etc. Start your journey from buying your first longboard to become a longboarding expert.

Delongboard.com is a participant in Amazon Associates Program, an affiliate program for websites to recommend products available at Amazon and earn advertising fees. Few links at our website are such links and we may get commission for referring you to Amazon. But, it doesn’t change or impact our evaluation criteria for these products. We throughly review all the products (listed at our website) and suggest the products to you which deserves to be in our list. Check complete disclosure here.